Set amid a sea of suburban-style surface parking and featuring enough car entrances to endanger pedestrians on four different streets, the new Daily's gas station proposed for LaVilla couldn't be a worse fit for a Downtown neighborhood. Fortunately, a few simple fixes could improve the design dramatically – if the City of Jacksonville doesn't fold on upholding common sense design requirements already on the books.

The prominent block bounded by Bay, Broad, Forsyth and Jefferson Streets was once the southern gateway to LaVilla’s primary commercial corridor on Bay Street. Like LaVilla as a whole, this block suffered a decline in the later 20th century, particularly following a 1980 redevelopment of Broad Street, which contributed to the decline of the corridor’s businesses, and to the razing of most of LaVilla in the early 1990s, which left a neighborhood dubbed by the local Black community as “Uptown” a veritable moonscape for 30 years and counting. In 2014, the former Davis Furniture Building, one of the last two historic buildings remaining on the block, met its fate by fire. 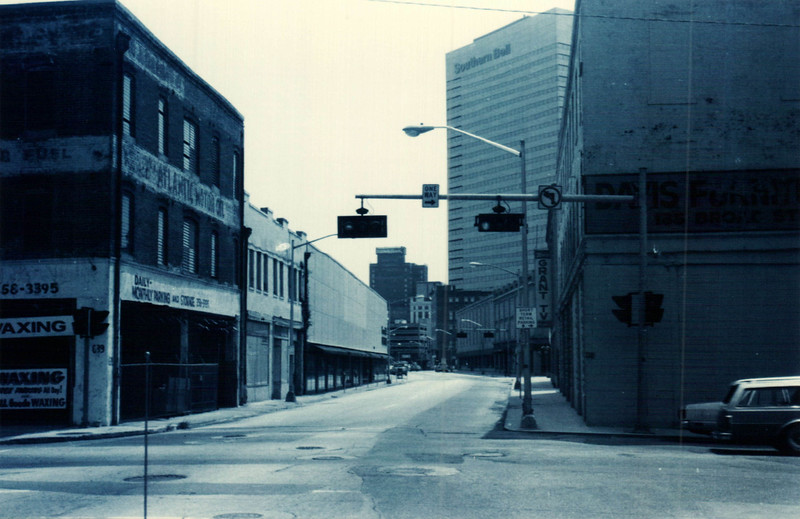 The intersection of Jefferson and Forsyth Streets during the early 1990s. (City of Jacksonville)

In 2020, the owners of the final surviving building sought permits to raze it. The building, which had housed LaVilla’s early 20th century Greek and Syrian Club and a number of later businesses including nightclubs like the Milk Bar and Kartouche, would make way for a new use: a new gas station from Jacksonville convenience store chain Daily’s. Now, that project is going before the Downtown Development Review Board for vetting against the city’s design standards. While Daily’s should be commended for their interest in Downtown Jacksonville and a gas station with an appropriate urban design could potentially be a positive addition, plans for the development released on January 5, 2023 show that Daily’s has missed the mark in some serious ways.

As in, they’re really, really bad.

A suburban square peg in an urban round hole

The major issue here is context: Broad Street was historically a busy, pedestrian-friendly business district, and plans are in the works to make it one again (more on that in a minute). Whatever is built here should reflect that context, and the Daily’s plan as proposed doesn’t cut it. It features a massive setback, a building surrounded by surface parking, and four different ingress/egress points disrupting the sidewalks on every surrounding street. In every way, it favors cars over pedestrian walkability, which may be appropriate on an arterial road in a suburban setting, but it doesn’t work for a walkable urban area. In other words, Daily’s wants to force a suburban-style site plan in an area that just doesn’t suit it.

A better site plan would move the main building to the most prominent corner, giving it easy access for cars and pedestrians alike. It would put the parking behind the building and reduce the car entrances for pedestrian safety. This isn’t just common sense, it’s also the City of Jacksonville’s own Downtown Design Guidelines. Jacksonville’s policy for downtown is that “No portion of a building or structure shall be set back from the right-of-way line of a public street.” As for foregrounding the pedestrian experience over car circulation, the guidelines say, “Building facades shall involve the pedestrian on the street.” Parking requirements are also specifically outlined: “The impact of parking and service areas in downtown shall be minimized by locating parking lots and garages away from sidewalks and pedestrian connections and within projects or off service alleys.” The Daily’s project violates every one of these requirements, and then some. These are perfectly sensible conditions that shouldn’t be thrown out without a very good reason – and for this project, Daily’s doesn’t have one.

Additionally, the Daily’s site plan doesn’t fit with ongoing plans for the surrounding blocks and neighborhood. It doesn’t jibe with the city’s LaVilla Neighborhood Development Strategy and ongoing developments working to revitalize LaVilla in a contextually-sensitive way, including the renovation of Historic Stanton, Lift Ev’ry Voice and Sing Park and the Johnson Commons townhome project. It is our hope that we can influence design changes in the Dailys’ project which will enhance those continuing efforts to the benefit of all of Downtown.

Fortunately, the Daily’s project could be improved with a few sensible, cost-effective design modifications that would produce a more contextually-sensitive project. Each of these would not only improve the design, but bring it into compliance with the Downtown Design Guidelines:

Conclusion: Yes, this can be (and has been) pulled off

After years of disrepair, LaVilla has become an urban core redevelopment hot spot. A rendering of Historic Stanton’s redevelopment plans by Eimer Design.

In the past, city officials have bent the rules for Downtown developments on the grounds that missing out on the project would be a blow for Downtown. If not this developer, who else would build there? After several years, the answer is clear: a whole lot of people. Particularly driven by adaptive reuse of existing buildings, the Downtown Northbank is undergoing a veritable renaissance of new projects. Ongoing plans from JWB Real Estate Capital, Corner Lot Development, Fuqua Development, Groundwork Jacksonville and Silver Street Capital show that that energy is now in and around LaVilla. There’s simply no reason for the the city to break its own rules for one gas station.

A rendering of Brooklyn’s One Riverside mixed-use development. One Riverside is within walking distance of the proposed Daily’s gas station site. (Fuqua Development)

This is especially the case given that there are plenty of successful models for urban gas stations across the country, including in Columbus, Ohio and Atlanta, Georgia.

In fact, Daily’s itself has better models to lean on. The Daily’s on Atlantic Blvd. in San Marco was also originally pitched with a suburban design. Due to input from the San Marco Preservation Society and others, the design was altered to move the main building closer to Atlantic Blvd. and create a plan that’s a much better fit for an urban neighborhood. These common-sense design fixes haven’t hampered the station; in fact, it has been wildly successful.

These fixes are simple, cost-effective and grounded in common sense. All that’s needed to turn this project from a suburban square peg into an urban amenity appropriate for LaVilla is for the city to uphold the sensible guidelines already on the books. To let the Downtown Development Review Board know your thoughts on this project, contact Lori Radcliffe-Meyers, Redevelopment Coordinator, at (904) 255-5307 or ksusan@coj.net, or contact the DDRB members: