What hotels can do for downtown vibrancy

A new Home2 Suites in Brooklyn is the latest hotel project moving forward in Downtown Jacksonville. With more hotels in various stages of planning, it's time for Jacksonville to embrace the positive impacts these developments can have on the vibrancy of urban neighborhoods. 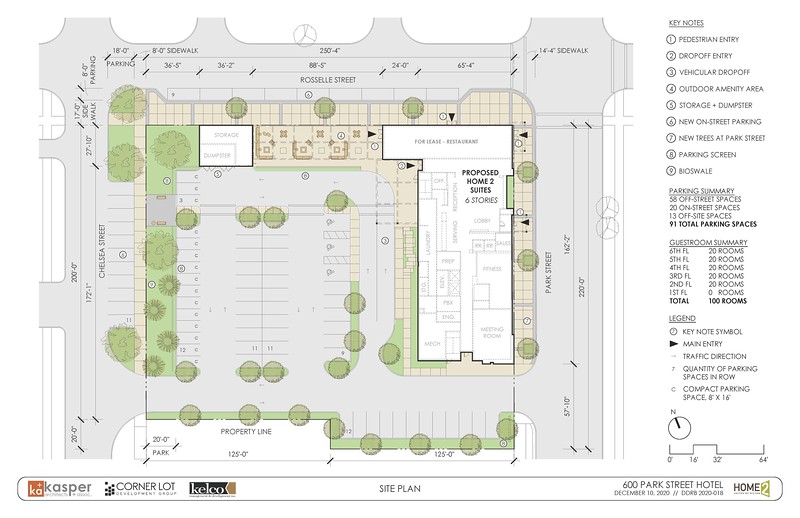 When the new Home2 Suites in Brooklyn opens its doors, the six floor, 100-room extended-stay hotel will do more than just give out-of-town visitors another place to spend the night: it will also provide a much-needed boost to Urban Core restaurants, retailers and other businesses.

Founded in 2009, Home2 Suites by Hilton is an all-suite extended-stay hotel that features a contemporary aesthetic and mid-level pricing. Home2 Suites typically include “lifestyle-focused amenities,” such as community spaces, laundry, and fitness areas. The Hilton-branded chain has seen considerable growth since its founding, and is the fastest growing brand in Hilton company history.

The Brooklyn project is spearheaded by Kelco Management & Development and Corner Lot Development Group. It will replace an overgrown surface parking lot on a desolate stretch of Brooklyn’s Park Street. In addition to the 10,720 square foot hotel building, the development includes space for a restaurant at the southwest corner of Park and Rosselle Streets with outdoor seating along Rosselle. The hotel will be limited-service, meaning it will offer fewer amenities than a full-service hotel like the Hyatt Regency Jacksonville Riverfront. The project is expected to cost $17.31 million. A Hilton Homewood Suites built in 2015 helped contributed to the rebirth of Pittsburgh’s popular Strip District.

Hotels are a critical part of the revitalization of many major city downtowns. Hotel guests are essentially new wallets within the city, spending money and visiting our cultural attractions and special events. The economic benefits of hotels are numerous: they create jobs, generate additional property tax revenue, and add life by replacing surface parking lots. Furthermore, the visitors they house tend to spend money at local restaurants, gas stations, retailers, special events and other nearby businesses and destinations on a daily basis. According to the American Hotel & Lodging Association (AHLA), hotels contribute over $1 billion to the Northeast Florida economy every year:

Originally built in 1979, the San Antonio Marriott Riverwalk is one of several hotels that helped turn San Antonio’s Riverwalk into a major destination.

Perhaps the most significant impact, however, is the ripple effect that occurs when a hotel opens in a downtown area. Janesville, Wisconsin provides a recent example. The Cobblestone was the city’s first downtown hotel when it opened in 2019, and its positive effect on local businesses and street-level vibrancy was immediate. “When visitors stay overnight, they spend twice as much as a day-trip visitor,” says Errin Welty, downtown development account manager for the Wisconsin Economic Development Corporation. “They eat more meals in the community, go out for entertainment in the evening and shop at downtown retailers.”

According to Welty, there are also intangible benefits to Downtown hotels. “If you’re a major corporation located downtown and you’re bringing in clients, you can really benefit from having a hotel in close proximity,” she says. “It makes it easier to recruit potential employees and entertain customers when a hotel is nearby. If guests have to travel out of town or back to the highway, it significantly lessens the overall experience of their visit and could make a business less competitive.”

To get off the ground, the developers of the Brooklyn Home2 Suites are seeking $2,385,219 in cash incentives from the Downtown Investment Authority. While the DIA board ultimately voted in favor of granting some incentives, the agency staff report had recommended rejecting the incentives. Among the criticism offered in the report is the claim that Home2 Suites could negatively impact existing hotels and vacancy rates.

This claim gives us at The Jaxson pause. For one thing, another hotel means another option for visitors, which in turn means more customers for local businesses – the goal of everyone hoping for a more vibrant Downtown. For another, the claim fails to take into account the fact that Home2 Suites isn’t a direct competitor to many of Downtown Jacksonville’s existing hotels. The new project is an extended-stay hotel, which cater to visitors needing lodging for longer periods of time. Accordingly, the units are suites, offering more space than most hotel rooms and different amenities such as kitchens. Today, Downtown Jacksonville only has two extended-stay hotels, the Residence Inn by Marriott in Brooklyn, and the Homewood Suites by Hilton in the Southbank.

Brooklyn’s Residence Inn is one of only two extended-stay hotels in Downtown Jacksonville. Located just two blocks from the proposed Home2 Suites, it received incentives from the DIA in 2018.

Additionally, Home2 Suites offers a different level of service than the two existing extended-stay hotels and other options for business travelers like the Hyatt Regency Jacksonville Riverfront. Those are full-service hotels that offer an increased level of amenities and luxuries. Because they have higher overheads and larger staffs, they come with higher pricetags. Home2 Suites cater to travelers seeking fewer amenities and cheaper prices. The brand’s primary competitors are TownePlace Suites by Marriott and InterContinental Hotel Group’s Candlewood Suites, neither of which have locations in Downtown Jacksonville. As such the new hotel provides an option that can’t be elsewhere in Downtown Jacksonville. With FIS expanding in with the coming FIS World Headquarters and other growth in the neighborhood, a suite-type hotel option is certainly likely to be well used.

The DIA clearly understands how important hotels are for Downtown revitalization, considering they provided incentives for the Residence Inn by Marriott just two blocks away from the Home2 Suites site and approved a massive package for Shad Khan’s Four Seasons hotel project in June. Looking across Jacksonville’s peer cities, places like Nashville, Charleston and New Orleans receive major boosts from business travelers, tourists and other visitors. When it comes to restoring Jacksonville’s Downtown, creating an environment where several hotels can survive and thrive should be embraced as a major goal.