A WJCT News article highlighting the needs for safer streets in Duval County, along with information promoting this week's Safe Streets Summit. Organized by the North Florida TPO and American Planning Association First Coast Section, this event being held to address many of the multimodal concerns throughout Northeast Florida.

Join the North Florida TPO and American Planning Association First Coast Section on Friday, November 5, 2021 for the third annual Safe Streets Summit! This year’s event theme is “Connecting our Communities from the Inside Out.” Attendees will explore the needs, challenges and accomplishments of ensuring safe and accessible streets within our urban neighborhoods, as well as projects that connect our core through the suburbs to our beaches in North Florida. Click here for more information.

A man was struck and killed by a car early morning on October 18th near the Jacksonville Zoo, marking the 46th Duval County pedestrian to die in traffic so far this year, surpassing the total number of pedestrian deaths of any year in the past decade.

His death comes just days after an elderly woman was hit and killed by a driver on October 15th, just before sunrise, on Kings Road. That street is one of the city’s widest and most dangerous for pedestrians, according to Larry Roberts with the city’s Bicycle Pedestrian Advisory Committee and head of the nonprofit JTC Running.

He spoke on the corner of another busy intersection in Jacksonville — San Jose Blvd and University Boulevard. Standing near the only pedestrian crosswalk within almost a mile in each direction, Roberts said crossing signals without countdowns, lots of lanes and long distances between crosswalks have made parts of the city especially dangerous for those on foot.

“We have to be so careful. In August, I was nearly killed down here at DuPont and San Jose,” Roberts said. “The driver looked up just as he passed me with this look of horror on his face.” 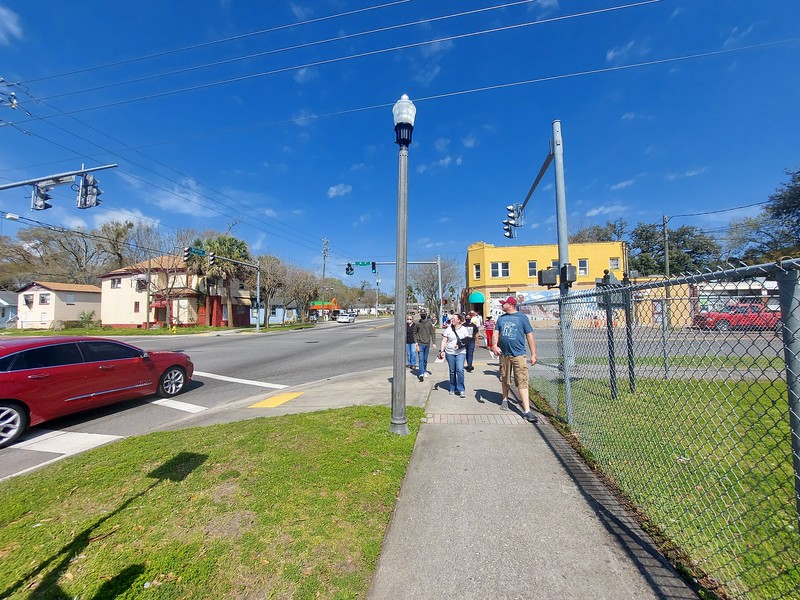 His group has been advocating for the city to take greater action on its 2017 Pedestrian and Bicycle Master Plan. Pedestrian deaths fell in the year after the report was issued, when the city allocated more than a million dollars toward a pedestrian and bicycle safety improvement plan, but have been steadily climbing back up since 2018.

“There are many neighborhoods that have poor, broken, uneven sidewalks, and many areas that have no sidewalks at all,” Roberts said.”We consider it just critical that the city develop an inventory of its sidewalks and bike lanes so that they know what they’ve got and that we can continue to push to expand it for everybody.”

Data from the Florida Department of Highway Safety and Motor Vehicles show 45 pedestrians were killed in traffic in Duval County in 2020. The county has already surpassed that number so far this year according to the Jacksonville Sheriff’s Office.

Jacksonville was named the 10th most dangerous metropolitan area in the country for pedestrians in a study from the National Complete Streets Coalition earlier this year. Even when accounting for population growth, the number of deaths per hundred thousand residents has remained one of the highest in Florida, with 4.5 deaths per 100,000 residents last year.

Representatives from the city did not reply to requests for comment Monday about the rising number of pedestrian deaths. Jacksonville did slightly increase its budget for adding new, safe pedestrian crossings last year and allocated another $300,000 for the upcoming fiscal year. Most of that money will go toward implementing Rectangular Rapid Flashing Beacons, which are crosswalks with flashing lights outside of main intersections.

Despite the recent investment, the city is going the opposite direction of its stated goal of having zero pedestrian deaths by 2030. Advocates say to get anywhere near that number, there needs to be a comprehensive survey of the city’s sidewalks and the political will to invest in improving them.

Join the North Florida TPO and American Planning Association First Coast Section on Friday, November 5, 2021 for the third annual Safe Streets Summit! This year’s event theme is “Connecting our Communities from the Inside Out.” Attendees will explore the needs, challenges and accomplishments of ensuring safe and accessible streets within our urban neighborhoods, as well as projects tat connect our core through the suburbs to our beaches in North Florida. Click here for more information.